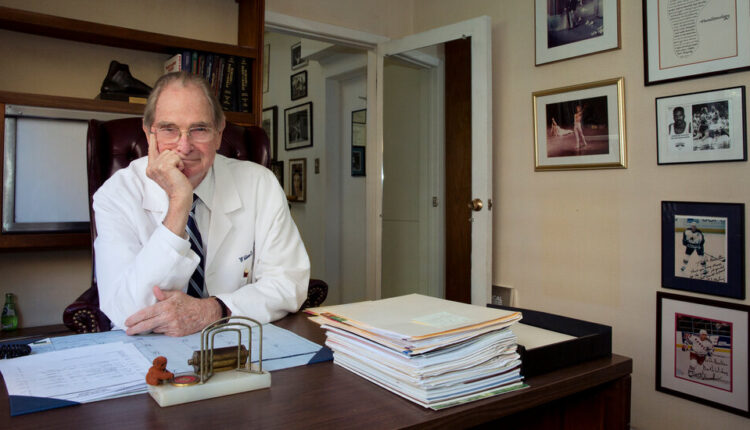 William G. Hamilton, Doctor to Dancers, Is Dead at 90


Dr. William G. Hamilton, who as the attending orthopedic surgeon for New York City Ballet spent more than 40 years fixing bone spurs, tendinitis, bursitis, torn ligaments and what he called “the Nutcracker Fracture,” died on March 29 at his home in Croton-on-Hudson, N.Y. He was 90.

His wife, Linda Hamilton, said the cause was congestive heart failure.

Ballet dancers may be the “athletes of God,” as Albert Einstein supposedly said. But until Dr. Hamilton came along, they were treated more like ethereal beings than physical bodies that could crack, tear and otherwise fall apart under the extreme and often unnatural pressures of repeated pliés and grand jetés.

In fact, it was George Balanchine, the choreographer who famously insisted that his dancers stoically work through their stubbed toes and sprained ankles, who asked Dr. Hamilton to become the first in-house doctor for the 100-plus members of New York City Ballet, in 1972.

Dr. Hamilton immediately said yes, though he knew nothing about ballet. He immersed himself in the art, attending weekend classes and becoming close to Balanchine and, later, the dancer and choreographer Mikhail Baryshnikov, who in 1980 hired him to be the attending surgeon for American Ballet Theater as well.

A courtly 6-foot-3 Southerner, Dr. Hamilton became a favorite and even revered figure around Lincoln Center. He had a disarming bedside manner that put young dancers at ease when they came to him worried that a sprained ankle might end their career.

He kept a ballet barre in his examining room, and he was renowned for catching early signs of chronic, potentially debilitating problems just by asking a dancer to go through a few routine motions.

Early on, he realized that while dancers suffered the same kinds of injuries athletes did, they got them in obscure ways and places. He saw, for example, that the rapid movements required by Balanchine’s ballets came with the risk of foot and ankle injury, while the leaps and bounds more common under Mr. Baryshnikov were more threatening to the hips and knees.

“From the very beginning, I learned that although they get the same injuries as athletes, dancers are artists first,” he told Dance Magazine in 2011.

When Dr. Hamilton started, in the early 1970s, there was no such thing as dance medicine, and indeed foot and ankle injuries were a largely understudied field of orthopedic medicine.

He built up both fields through lectures and journal articles in which he diagnosed previously understudied injuries — he was among the first to describe the Nutcracker Fracture, for example, which involves multiple breaks in the cuboid bone in the foot. He served as the president of the American Orthopaedic Foot and Ankle Society from 1992 to 1993, and today every sizable dance company in the country has an orthopedic surgeon on call.

“Bill was the king of orthopedic dance medicine,” Glenn Pfeffer, the co-director of the Cedars-Sinai/USC Glorya Kaufman Dance Medicine Center, said in a phone interview.

Dr. Hamilton continued to perform surgery until he was 81 and consulted until a few years ago, long after most physicians would have hung up their scalpels.

“I would have retired a long time ago if it wasn’t for the dancers,” he said in a 2016 interview with the magazine Princeton Alumni Weekly. “It’s very rewarding because they love what they do. They just want to dance; they wouldn’t want to do anything else.”

William Garnett Hamilton did not set out to be a Manhattan doctor, let alone a balletomane. He was born on Jan. 11, 1932, in Altus, Okla., where his father, Milton Hamilton, was a salesman and his mother, Elizabeth (Garnett) Hamilton, was a homemaker.

The family moved to Shreveport, La., when he was very young. After his parents divorced, his mother remarried and moved to Portage, Wis., where her new husband owned a plastics manufacturing company.

William graduated from Princeton in 1954 with a degree in engineering, and after two years in the Army he joined his stepfather’s business in Wisconsin. He married and had a child; by his mid-20s, he said, he could see his entire life unfolding before him. He didn’t like what he saw.

Against his parents’ wishes that he stay to run the family company, he applied to medical school. He was accepted at Columbia, one of the few schools that took older students (he was 28 when he enrolled). He decided to focus on orthopedics — a field that he said was not unlike engineering, with muscles and joints standing in for ropes and levers. He graduated in 1964 and, after several years of residency, opened a practice in Midtown Manhattan in 1969.

In addition to his work with the two ballet companies, he provided the same services to the companies’ affiliated schools, the School of American Ballet and the Jacqueline Kennedy Onassis School, and he consulted for numerous Broadway shows and New York sports teams, including the Knicks and the Yankees.

His first two marriages ended in divorce. He met his future third wife, Linda Homek, when she was a dancer with New York City Ballet. She later received a doctorate in psychology from Adelphi University. In 2000 she and Dr. Hamilton created a multidisciplinary wellness team, including a dietitian and a gastroenterologist, to care for the company’s dancers, a model that has since been adopted by other ballet companies.

Along with his wife, Dr. Hamilton is survived by his sister, Ann Kirk; his sons, William Jr. and Lewis; and three grandchildren.