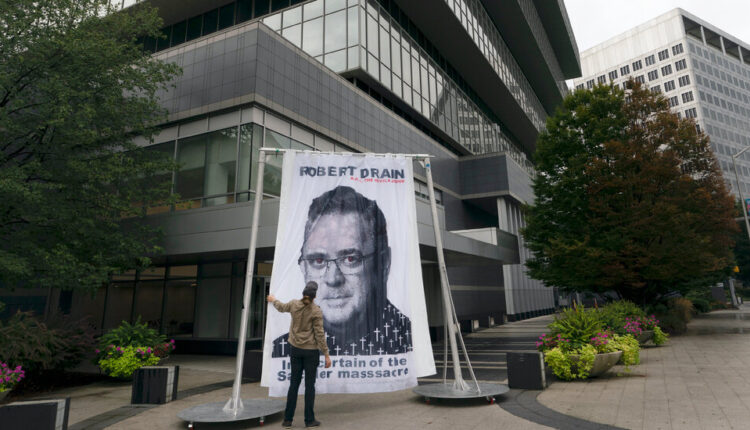 U.S. Seeks to Block Bankruptcy Plan That Would Free Sacklers From Opioid Claims


WASHINGTON — The Justice Department moved on Thursday to block a bankruptcy plan that grants broad legal immunity to the pharmaceutical company Purdue Pharma, whose drug OxyContin has been at the heart of the nation’s opioid epidemic.

William K. Harrington, the U.S. trustee for the Justice Department, filed a motion in federal court to halt confirmation of the settlement while the department appeals the judge’s decision to approve the deal.

Mr. Harrington said that the court should grant his request for a stay because the federal government “has a substantial possibility of success on appeal and because the harm that would result from denying a stay outweighs any potential harm from granting one.”

The contentious deal was approved this month by Judge Robert Drain, a federal judge in White Plains, N.Y. Among other things, it could release the Sackler family, which owns Purdue Pharma, from future legal liability in exchange for a $4.3 billion financial contribution from the family’s own fortune.

Mr. Harrington argued in his filing that the appellate court decided that the deal takes away the rights of those with a valid legal claim against the Sacklers “without their knowing and informed consent, adequate notice or an opportunity to be heard.”

He also said that the federal government’s case was supported by previous Supreme Court rulings.

The Justice Department filing is the latest in the yearslong battle to hold the Sackler family to account for creating, marketing and selling OxyContin, a highly addictive painkiller.

Some experts have argued that OxyContin helped fuel an opioid addiction epidemic that has killed more than 500,000 people nationwide and still grips the United States 15 years after the drug was introduced to the market.

But OxyContin made the Sackler family incredibly wealthy. From 2008 to 2017, the family withdrew $10.4 billion from Purdue Pharma.

As more people died from opioid use, plaintiffs began to sue Purdue. By the time the company filed for bankruptcy in September 2019, it faced 2,900 lawsuits, more than 600 of which named the Sacklers. The bankruptcy proceedings put a pause on those legal claims.

Judge Drain approved the settlement plan after painstaking negotiations among the family, local governments, hospital systems and others who had sued the company and were likely to be involved in costly litigation for years to come.

Those who supported the deal, including a majority of states and some of the plaintiffs, argued that it would provide much-needed funding for drug treatment programs.

Steve Miller, the chairman of Purdue’s board, said that the settlement “ensures that billions of dollars will be devoted to helping people and communities who have been hurt by the opioid crisis.” And some members of the Sackler family called the resolution an important step in addressing the public health crisis.

But critics said that the terms unfairly shielded the Sacklers. It gave the family protections typically afforded to companies that have filed bankruptcy, but not to the company owners if they themselves have not declared bankruptcy.

The Justice Department and some states appealed Judge Drain’s ruling.