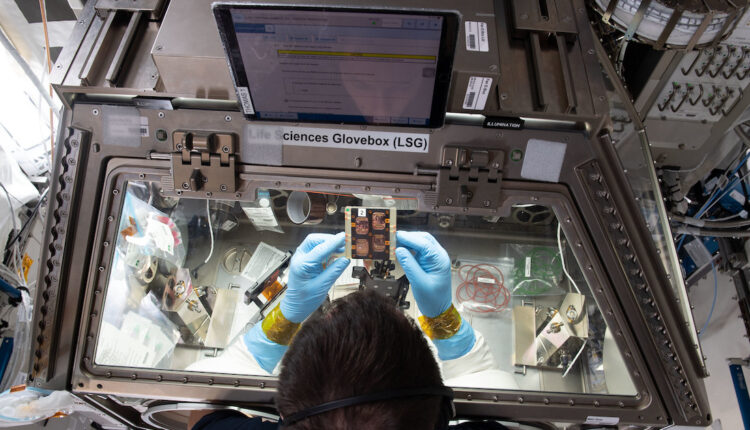 Throughout the mission, the astronauts will support hundreds of research and technology development investigations, several of which are sponsored by the ISS National Laboratory.

One such investigation is from biotechnology company Lambda Vision – a company that’s previously launched investigations into space – whose goal is to create a protein-based artificial retina that can restore vision for patients with degenerative eye diseases.

“LambdaVision hopes to demonstrate that manufacturing the artificial retina by building multiple thin layers of protein on a surface in microgravity improves its overall uniformity,” according to a statement.

Additionally, a study from Los Alamos National Lab in collaboration with ISS National Lab Commercial Service Provider Rhodium Scientific accompanied the astronauts. This investigation evaluates gut microbes, looking more deeply into specific gut microbes that only change in space. They could affect astronauts and future space travelers. The project builds upon the team’s prior study onboard the space station.

Over the next six months, the astronauts will work on the above investigations and dozens of other projects going to the space station on NASA-funded Commercial Resupply Services missions.

“ISS National Lab-sponsored projects set to launch on upcoming missions will leverage the orbiting laboratory for research in life and physical sciences, advanced materials and technology development,” according to a statement.

Earlier this year, Brain.space, the maker of an EEG helmet, emerged from stealth with $8.5 million and a plan to measure the neurological activity of three astronauts aboard the ISS to assess the effects of spaceflight on the brain. Each astronaut was to participate in experiments before, during and after the mission.

To study astronauts’ health and performance during commercial spaceflights, the Translational Research Institute for Space Health (TRISH) at Baylor College of Medicine launched EXPAND (Enhancing eXploration Platforms and Analog Definition). This research platform collects data from flights and keeps it in a centralized database to improve the health of astronauts and find innovations for use on Earth.