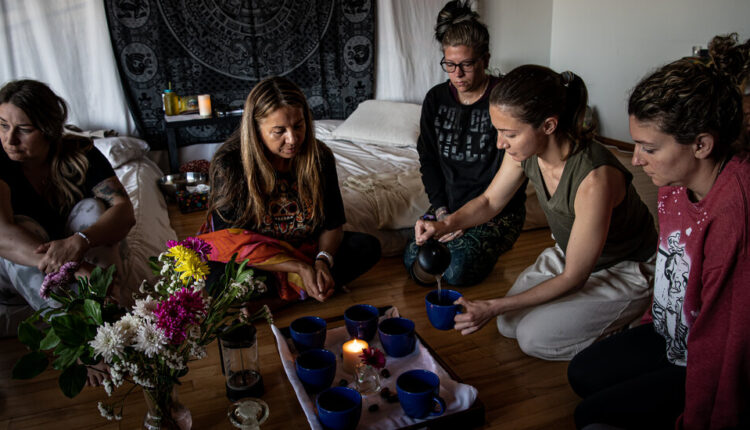 ‘I Want to Reset My Brain’: Female Veterans Turn to Psychedelic Therapy


TIJUANA, Mexico — Plumes of incense swirled through the dimly lit living room as seven women took turns explaining what drove them to sign up for a weekend of psychedelic therapy at a villa in northern Mexico with sweeping ocean views.

The wife of a Navy bomb disposal expert choked up as she lamented that years of unrelenting combat missions had turned her husband into an absent, dysfunctional father.

Kristine Bostwick, 38, a former Navy corpsman, said she hoped that putting her mind through ceremonies with mind-altering substances would help her make peace with the end of a turbulent marriage and perhaps ease the migraines that had become a daily torment.

“I want to reset my brain from the bottom up,” she said during the introductory session of a recent three-day retreat, wiping away tears. “My kids deserve it. I deserve it.”

A growing body of research into the therapeutic benefits of psychedelic therapy has generated enthusiasm among some psychiatrists and venture capitalists.

Much of the expanding appeal of such treatments has been driven by veterans of America’s wars in Afghanistan and Iraq. Having turned to experimental therapies to treat post-traumatic stress disorder, traumatic brain injuries, addiction and depression, many former military members have become effusive advocates for a wider embrace of psychedelics.

Psychedelic retreat participants often pay thousands of dollars for the experience. But these female veterans and spouses of veterans who had traveled to Mexico for treatment at the Mission Within were attending for free, courtesy of the Heroic Hearts Project and the Hope Project. The groups, founded by an Army ranger and the wife of a Navy SEAL, raise money to make psychedelic therapy affordable for people from military backgrounds.

The Mission Within, on the outskirts of Tijuana, is run by Dr. Martín Polanco, who since 2017 has focused almost exclusively on treating veterans.

“I became aware early on that if we focused our work on veterans, we would have a greater impact,” said Dr. Polanco, who said he had treated more than 600 American veterans in Mexico. “They understand what it takes to achieve peak performance.”

In the beginning, he said, he treated male veterans almost exclusively. But recently, he started receiving many requests from female veterans and military wives and began running women-only retreats.

With the exception of clinical trials, psychedelic therapy is currently performed underground or under nebulous legality. As demand soars, a handful of countries in Latin America, including Costa Rica, Jamaica and Mexico, have become hubs for experimental protocols and clinical studies.

The invasive symptoms of PTSD can affect combat veterans and civilians alike. Early intervention is critical for managing the condition.

Dr. Polanco, who is not licensed in the United States, has been practicing on the fringes of mainstream medicine for years, but his work is now drawing interest from more established specialists in mental health. Later this year, researchers at the University of Texas at Austin and Baylor College of Medicine intend to examine his protocols in two clinical studies.

The use of psychedelic treatments is not currently part of the standard of care for treatment of mental health conditions at Veterans Hospitals, according to Randal Noller, a spokesman for the Veterans Affairs Department. But with special approval, it is possible they could be administered as part of a research protocol, and the department’s Office of Mental Health and Suicide Prevention is “closely monitoring the developing scientific literature in this area,” Mr. Noller said.

In Mexico, two of the substances that Dr. Polanco administers — ibogaine, a plant-based psychoactive commonly used to treat addiction, and 5-MeO-DMT, a powerful hallucinogen derived from the poison of the Sonoran desert toad — are neither unlawful nor approved for medical use. The third, psilocybin mushrooms, may be taken legally in ceremonies that follow Indigenous traditions.

During the course of a weekend retreat, Dr. Polanco’s patients start with a ceremony using either ibogaine or psilocybin. The initial trip is intended to trigger disruptive thinking and deep introspection.

“You become your own therapist,” Dr. Polanco said.

On Sunday, participants smoke 5-MeO-DMT, often described as something between a mystical and a near-death experience.

Dr. Charles Nemeroff, the chairman of the department of psychiatry and behavioral sciences at the University of Texas at Austin, which recently started a center for psychedelic research, said that the hype about the curative potential of psychedelics has outpaced hard evidence. The risks — which include episodes of psychosis — are considerable, he said.

“Currently, we have no way to predict who will respond or not therapeutically or who might have a bad experience,” he said. “There is so much we still don’t know.”

The women at the Mexico retreat understood the risks. But several said they had lost faith in conventional treatments like antidepressants and had heard enough inspiring stories from friends to take a leap of faith.

By the time the seven women gathered in a circle for the mushroom ceremony on a recent Saturday, each had signed a hold-harmless waiver. They had filled out questionnaires that measure post-traumatic stress and other psychological ailments and had undergone a medical checkup.

Leading the ceremony was Andrea Lucie, a Chilean-American expert in mind-body medicine who spent most of her career working with wounded U.S. veterans. After blowing burning sage onto cups of mushroom tea served on a tray decorated with flowers and candles, Ms. Lucie read a poem by María Sabina, a Mexican Indigenous healer who led mushroom ceremonies.

“Heal yourself with beautiful love, and always remember, you are the medicine,” recited Ms. Lucie, who is from a Mapuche Indigenous family in Chile.

After imbibing, the women laid on mattresses on the floor and put on eye shades as soothing music played on a speaker.

The first stirrings came about 40 minutes into the ceremony. A couple of women lowered their shades and wept. One giggled and then roared with laughter.

Then the wails began. Jenna Lombardo-Grosso, the former Marine who lost her mother to suicide, stormed out of the room and huddled with Ms. Lucie downstairs.

Ms. Lombardo-Grosso, 37, sobbed and screamed: “Why, why, why!” She later explained that the mushrooms had surfaced traumatic childhood episodes of sexual abuse.

Inside the ceremony room, Samantha Juan, the Army veteran who was sexually abused as a child, began crying and pulled out her journal. It was her third time at a retreat administered by Dr. Polanco, where she said she had confronted a lifetime of traumatic memories that led her to drink heavily and lean on drugs to escape her pain after leaving the Army in 2014.

“I’ve learned how to give myself empathy and show myself grace,” said Ms. Juan, 37.

Her goal on this retreat, she said, was to make peace with a sexual assault that she said she had endured in the Army.

“In today’s journey, the focus is forgiveness,” Ms. Juan had said shortly before taking the mushrooms. “I don’t want that kind of grip on me anymore.”

As the effects of the mushrooms wore off, there was a prevailing sense of calm. The women swapped stories about their trips, cracked jokes and got lost in long embraces.

The jitters returned the next morning as the women waited for their turn to smoke 5-MeO-DMT, a trip that Dr. Polanco calls “the slingshot” for the speed and intensity of the experience.

Seconds after her lungs absorbed the toad secretions, Ms. Juan let out guttural screams and shifted on her mat. Ms. Bostwick looked panicked and unsteady as she shifted from laying on her back to a position on all fours. Ms. Lombardo-Grosso vomited, gasped for air and jolted violently as a nurse and Ms. Lucie held her steady.

When she regained consciousness, Ms. Lombardo-Grosso sat up and began weeping.

“It felt like an exorcism,” she said. “It felt like sulfur coming up, black, and now there’s nothing but light.”

That night, Alison Logan, the wife of a Navy explosive ordnance disposal expert who was on the brink of getting divorced, looked downcast. The trips, she said, had brought her sadness to the fore, but provided no insights nor sense of resolution.

“It felt like a lot of pain without any answers,” she said.

But the other participants said their physical ailments had vanished and their mood had brightened.

Ms. Bostwick said that she was “mystified,” but ecstatic, that her migraines were gone and that for the first time in a long time she felt a sense of boundless possibility.

“I feel like my body let go of so much of the anger and frustration and all the petty stuff that we hold on to,” she said. “I was overflowing with negativity.”

During the days after the retreat, Ms. Juan said she felt “full of energy and ready to take each day head on.”

Ms. Lombardo-Grosso said the retreat had helped her make peace with the loss of her mother and tilted her outlook toward the future from a sense of dread to one of optimism.

“I feel whole,” she said a few days later from her home in Tulsa. “Nothing is missing anymore.”