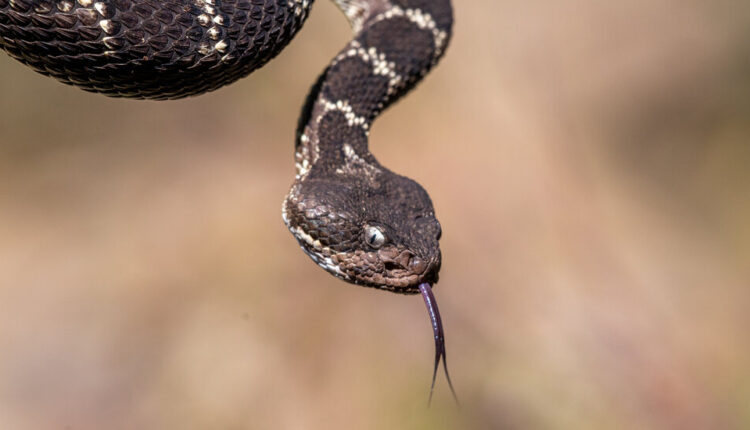 
TUCSON, Ariz. — In a small room in a building at the Arizona-Sonora Desert Museum, the invertebrate keeper, Emma Califf, lifts up a rock in a plastic box. “This is one of our desert hairies,” she said, exposing a three-inch-long scorpion, its tail arced over its back. “The largest scorpion in North America.”

This captive hairy, along with a swarm of inch-long bark scorpions in another box, and two dozen rattlesnakes of varying species and sub- species across the hall, are kept here for the coin of the realm: their venom.

Efforts to tease apart the vast swarm of proteins in venom — a field called venomics — have burgeoned in recent years, and the growing catalog of compounds has led to a number of drug discoveries. As the components of these natural toxins continue to be assayed by evolving technologies, the number of promising molecules is also growing.

“A century ago we thought venom had three or four components, and now we know just one type of venom can have thousands,” said Leslie V. Boyer, a professor emeritus of pathology at the University of Arizona. “Things are accelerating because a small number of very good laboratories have been pumping out information that everyone else can now use to make discoveries.”

She added, “There’s a pharmacopoeia out there waiting to be explored.”

It is a striking case of modern-day scientific alchemy: The most highly evolved of natural poisons on the planet are creating a number of effective medicines with the potential for many more.

One of the most promising venom-derived drugs to date comes from the deadly Fraser Island funnel web spider of Australia, which halts cell death after a heart attack.

Blood flow to the heart is reduced after a heart attack, which makes the cell environment more acidic and leads to cell death. The drug, a protein called Hi1A, is scheduled for clinical trials next year. In the lab, it was tested on the cells of beating human hearts. It was found to block their ability to sense acid, “so the death message is blocked, cell death is reduced, and we see improved heart cell survival,” said Nathan Palpant, a researcher at the University of Queensland in Australia who helped make the discovery.

If proven in trials, it could be administered by emergency medical workers, and might prevent the damage that occurs after heart attacks and possibly improve outcomes in heart transplants by keeping the donor heart healthier longer.

“It looks like it’s going to be a heart attack wonder drug,” said Bryan Fry, an associate professor of toxicology at the University of Queensland, who is familiar with the research but was not involved in it. “And it’s from one of the most vilified creatures” in Australia.

The techniques used to process venom compounds have become so powerful that they are creating new opportunities. “We can do assays nowadays using only a couple of micrograms of venom that 10 or 15 years ago would have required hundreds of micrograms,” or more, Dr. Fry said. “What this has done is open up all the other venomous lineages out there that produce tiny amounts of material.”

There is an enormous natural library to sort through. Hundreds of thousands of species of reptile, insect, spider, snail and jellyfish, among other creatures, have mastered the art of chemical warfare with venom. Moreover, the makeup of venom varies from animal to animal. There is a kind of toxic terroir: Venom differs in quantity, potency and proportion and types of toxin, according to habitat and diet, and even by changing temperatures due to climate change.

Venom is made of a complex mix of toxins, which are composed of proteins with unique characteristics. They are so deadly because evolution has honed their effectiveness for so long — some 54 million years for snakes and 600 million for jellyfish.

Venom is the product of a biological arms race over that time; as venom becomes more deadly, victims evolve more resistance, which in turn makes venom even deadlier. Humans are included in that dynamic. “We are made of protein and our protein has little complex configurations on it that make us human,” said Dr. Boyer, who founded the Venom Immunochemistry, Pharmacology, and Emergency Response Institute, or VIPER. “And those little configurations are targets of the venom.”

The specific cellular proteins that the venom molecules have evolved to target with pinpoint accuracy are what make the drugs derived from them — which use the same pathways — so effective. Some proteins, however, have inherent problems that can make new drugs from them unworkable.

There is usually no need to gather venom to make these drugs. Once they are identified, they can be synthesized.

There are three main effects from venom. Neurotoxins attack the nervous system, paralyzing the victim. Hemotoxins target the blood and local tissue toxins attack the area around the site of poison exposure.

Numerous venom-derived drugs are on the market. Captopril, the first, was created in the 1970s from the venom of a Brazilian jararaca pit viper to treat high blood pressure. It has been successful commercially. Another drug, exenatide, is derived from Gila monster venom and is prescribed for Type 2 diabetes. Draculin is an anticoagulant from vampire bat venom and is used to treat stroke and heart attack.

The venom of the Israeli deathstalker scorpion is the source of a compound in clinical trials that finds and illuminates breast and colon tumors.

Some proteins have been flagged as potential candidates for new drugs, but they have to journey through the long process of manufacture and clinical trials, which can take many years and cost millions of dollars. In March, researchers at the University of Utah announced that they had discovered a fast-acting molecule in cone snails. Cone snails fire their venom into fish, which causes the victims’ insulin levels to drop so rapidly it kills them. It holds promise as a drug for diabetes. Bee venom appears to work with a wide range of pathologies and has recently been found to kill aggressive breast cancer cells.

In Brazil researchers have been looking at the venom of the Brazilian wandering spider as a possible source of a new drug for erectile dysfunction — because of what happens to human victims when they are bit. “A characteristic of their envenomation is that males get extraordinary painful, incredibly long-lasting erections,” Dr. Fry said. “They have to separate it from its lethal factor, of course, and find a way to dial it back.”

Some scientists have long suspected that important secrets are locked up in venom. Scientific interest first surfaced in the 17th century. In the mid-18th century the Italian physician and polymath Felice Fontana added to the body of knowledge with his treatise, and in 1860 the first research to look at venom components was conducted by S. Weir Mitchell in Philadelphia.

The medicinal use of venom has a long history, often without scientific support. Venom-dipped needles are a traditional form of acupuncture. Bee sting therapy, in which a swarm of bees is placed on the skin, is used by some natural healers. The rock musician Steve Ludwin claims to have routinely injected himself with diluted venom, believing it to be a tonic that builds his immune system and boosts his energy.

The demand for venom is increasing. Ms. Califf of the Arizona-Sonora Desert Museum said she had to travel to the desert to find more bark scorpions, which she hunts at night with a black light because they glow in the dark. Arizona, Dr. Boyer said, is “venom central,” with more venomous creatures than in any other U.S. state, making it well suited for this kind of production.

Scorpion venom is harvested from the arachnid by applying a tiny electrical current, which causes the spider to excrete a small drop of the amber liquid at the tip of its tail. With snakes, venom glands are gently massaged as they bare their fangs over a martini glass. After they surrender their venom, the substance is sent to researchers around the globe.

Pit vipers, including rattlesnakes, have other unusual adaptations. The “pit” is the site of the biological equipment that allows snakes to sense the heat of their prey. “You can blindfold a snake and it will still strike the target,” Dr. Boyer said.

But it’s not just venom that’s far better understood these days. In the last few years, there has been a well-heeled and concerted search for antivenom.

In 2019 the Wellcome Trust created a $100 million fund toward the pursuit. Since then there have been numerous research efforts around the world looking for a single universal treatment — one that can be carried into remote areas to immediately help someone bitten by any type of venomous snake. Currently, different types of snakebites have different antivenom.

It has been difficult. The wide array of ingredients in venom that benefit new drug research has also made it difficult to find a drug that can neutralize them. One promising universal antivenom, varespladib, is in clinical trials.

Experts hope the role of venom will lead to more respect for the fear-inducing creatures who create them. Dr. Fry, for his work on anticoagulants, is studying the venom of Komodo dragons, which, at 10 feet long and more than 300 pounds, is the largest lizard in the world. It is also highly endangered.

Work on the Komodo, “allows us to talk about the broader conservation message,” he said.

“You want nature around because it’s a biobank,” he added. “We can only find these interesting compounds from these magnificent creatures if they are not extinct.”