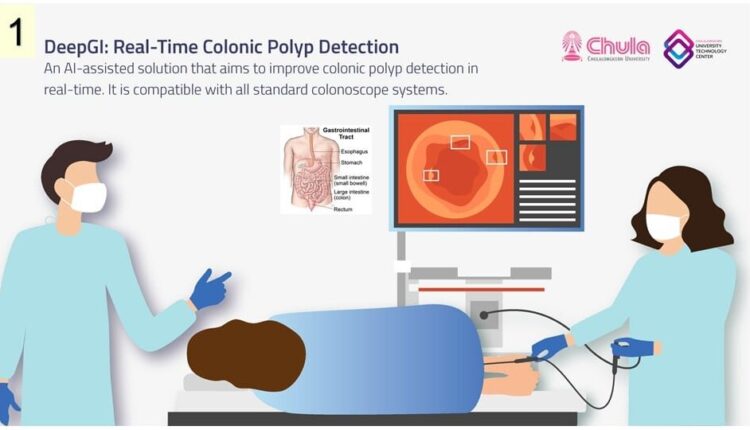 Researchers from Chulalongkorn University, a public university in Thailand, have created an AI-based system for detecting gastrointestinal disorders.

DeepGI (Deep Technology for Gastrointestinal Tracts) spots abnormal tissues indicative of early colonic neoplasm, such as polyps, in the colon with over 90% accuracy, according to Dr Peerapon Vateekul, a member of the research team from Chula Engineering.

The software uses deep learning, a machine learning technique, and is trained using colonoscopy data images collected since 2019 with the support of the Chulalongkorn University Technology Center and ESM Solutions Co.

The system can also produce a characterisation of detected polyps and identify them as neoplastic (malignant) or hyperplastic (benign) without the need for a biopsy.

Colorectal cancer is the third most common type of cancer found among Thai people. About 15 million seniors aged 50 and above are said to be at risk of the disease. Unfortunately, there are only around a thousand endoscopists who are available to perform colonoscopies in the country.

Additionally, present standard approaches to diagnosing colorectal cancer include colonoscopy or lower GI endoscopy, which according to the researchers, have shown limitations given various forms of polyps in terms of shape, size, and colour. They noted that up to 22% of tests can be faulty.

Dr Peerapon hopes that their AI polyp detection tool will be “widely used as an aid for practising endoscopists at other hospitals, especially in the community setting who have shortages of medical and technological personnel”.

The technology has been applied to actual patients at the King Chulalongkorn Memorial Hospital since late last year.

Aside from being vendor agnostic, DeepGI can also be extended to detect abnormal biopsies in other parts of the human body. Dr Peerapon shared that their team is looking to test the system in other organs, such as the stomach and bile ducts.

The research team is currently in the process of applying for a national patent for their polyp detection software.

Chinese startup Wision AI in November got a CE mark to roll out its AI polyp detection software EndoScreener in Europe.